Bethesda, MD—The National Association of School Psychologists (NASP) is pleased to announce that it has awarded lifetime honorary memberships to Deborah P. Crockett, Susan Gorin, and Cecil R. Reynolds. A NASP honorary member is someone who, in the opinion of the majority of the Leadership Assembly, has made significant contributions to the field of school psychology. Each of the three 2017 recipients has also made an indelible contribution to NASP’s role in empowering school psychologists to help all children and youth thrive in school, at home, and throughout life.

“It is important to recognize and honor individuals who have dedicated their careers to advancing the mission of NASP,” commented NASP President John Kelly. “Only a handful of people rise to this status, and these three honorees epitomize the intent and purpose of the Honorary Membership designation. We are eternally grateful for their contributions.” 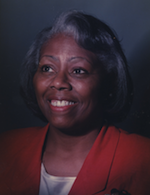 As a practitioner, Deborah Peek Crockett, PhD, NCSP, is known as a child and family advocate for appropriate education of all children; development, promotion, implementation, and training of tolerance and diversity issues; parent education and school involvement; assessment; and professional issues. She has received recognition for her contributions to school psychology from professional associations, Georgia State University, and Spelman College. Among her many accomplishments, Dr. Crockett served as the first African American President of NASP and of the Georgia Association of School Psychologists.

She has been the recipient of numerous awards and honors for her contributions to the profession of school psychology, including School Psychologist of the Year and the Lifetime Achievement Award, both presented to her by the Georgia Association of School Psychologists. For many years, Dr. Crockett was the driving force behind the NASP Tolerance-In-Action Campaign, the National Mental Health and Education Center for Children and Families, and the NASP-ERT Minority Scholarship Program, which is designed to provide financial assistance to minority candidates who are entering the field of school psychology. She has developed and published information for parent education, advocacy, and teacher training on topics of tolerance and diversity as well as other topics that promote positive child development and school performance.

Susan Gorin, CAE, began her tenure as NASP Executive Director on July 1, 1993, and will retire from the position on July 1, 2018. Significant work supported by Susan during her tenure includes two governance reorganizations; four strategic plan adoptions; two revisions of NASP standards; formation and initial NOVA-training of the National Emergency Assistance Team, with ongoing responses to multiple crises; adoption and development of the PREPaRE curriculum to its current capacity; launch of the GLB committee; navigation through APA’s Model Licensure Act process; launch of the NASP Mental Health Center to disseminate information about school-based mental health; development of the first-ever and subsequent NASP websites; an office move from Silver Spring to Bethesda, MD, and two remodels of the Bethesda office space; launch of the annual summer conferences; growth in budget, staff, membership, certification, and convention size; support to a president-elect upon the death of a sitting NASP president; sustained external relationships; collaborative work with hundreds of volunteer leaders; and the supervision of an A++ staff.

Prior to 1993, Susan was the Assistant Executive Director for Member and Unit Services at the Council for Exceptional Children (CEC). She was the first recipient of the Susan Phillips Gorin Award in 1983, presented annually by the CEC to a professional “who has demonstrated exemplary personal and professional qualities while making outstanding contributions to CEC and to children with exceptionalities.”

Cecil R. Reynolds, PhD, ABN, AAPdN, is Emeritus Professor of Educational Psychology at Texas A&M University, where he was also Professor of Neuroscience and a Distinguished Research Scholar. Well known for his work in psychological testing and assessment, he is author or editor of more than 55 books, including The Handbook of School Psychology, the Encyclopedia of Special Education, and the two-volume Handbook of Psychological and Educational Assessment of Children. He also authored or coauthored more than 35 tests, including the Behavioral Assessment System for Children, Third Edition (BASC–3; one of the most frequently administered test of its type in the English-speaking world), the BASC–3 Behavioral and Emotional Screening System (BASC–3 BESS), the Revised Children’s Manifest Anxiety Scale, Second Edition, and the Reynolds Intellectual Assessment Scales™, and he has published more than 300 scholarly works.

Cecil has received a number of national awards for his work, including the Lightner Witmer Award from the American Psychological Association (APA) and Early Career Awards from two APA divisions (15, Educational Psychology, and 5, Measurement and Statistics). He is a recipient of the APA Division 16 Senior Scientist Award, the Nadine Lambert Award, the National Academy of Neuropsychology’s Distinguished Lifetime Contribution to Neuropsychology Award, the APA’s Samuel Messick Award for Distinguished Contributions to Measurement Science, and several other national awards for his research on testing and assessment. Dr. Reynolds is the former editor-in-chief of several journals in the fields of psychological assessment and neuropsychology, and he served as associate editor of the Journal of School Psychology. Active in professional affairs, he has served as president of the National Academy of Neuropsychology, the American Board of Professional Neuropsychology, the American Academy of Pediatric Neuropsychology, and three APA divisions (5, 16, and 40). He was chair of the American Psychological Association Task Force on Zero Tolerance Policies in the Schools and was the longest serving member of the APA’s Committee on Psychological Testing and Assessment. He currently practices forensic neuroscience in Austin, TX.

Crockett, Gorin, and Reynolds join the following recipients of honorary membership status, many of whom are also NASP Lifetime Achievement Award recipients.

NASP is the world's largest organization of school psychologists; it is dedicated to the practice of school psychology and works to positively influence outcomes that directly affect the lives of students, families, and school communities. NASP advances the discipline of school psychology through (a) establishing high standards of training, practice, and ethical conduct; (b) providing diverse and robust professional development opportunities; (c) engaging in advocacy and services that promote nondiscriminatory, culturally responsive professional practices and equitable, high-quality education for all of our nation’s children and youth; and (d) initiating collaborative partnerships with key stakeholders to support comprehensive and integrated school psychological services in adequately resourced and supported educational environments.